Meet one of our skydivers Lene Sælen and find out how she ended up in Voss and what she thinks about Ekstremsportveko.

My first meeting with Ekstremsportveko was as a terrified and ecstatic skydiving student twelve years ago in 2009. Or actually, I had received my skydiving license just days before it was kicking off but was still pretty terrified at jumping out of a plane.

I started skydiving during the last year of my Ph.D. in physics, why I am still not sure. Maybe as a distraction from the nerves of having to finish my Ph.D. That at least worked. Skydiving was far from anything I had ever done. I did not even ski. I considered skiing a dangerous and completely unnecessary activity… (I ski quite a lot now).

For me, the challenge was not to plunge myself from a perfectly functioning airplane once, but to keep doing it, one terrified plunge at the time. What I did not expect was to fall completely and utterly in love. Well on the ground I would find myself staring at the sky with longing and though the famous Leonardo da Vinci quote apparently is fake, it still captured my feelings accurately.

“Once you have tasted flight, you will forever walk the earth with your eyes turned skyward, for there you have been, and there you will always long to return”

I had discovered a world both outside and within myself that I had never dreamed of. So much so that I changed my birthday (on Facebook) to the day of my A-license (yes, corny) and I named my rigg and gave him a Facebook profile (it was 2009 but yes, still quite corny).

Ekstremsportveko came as a celebration of this magical, secret world I had discovered. My plan was to collect Veko sweaters for every Veko I joined, but this turned out to mean too many sweaters.

Now twelve years later Veko is probably the only fixed point throughout the year for me, besides ice cream and bunad for the 17th of May. I don’t care what you have planned, the last week of June I am busy!

The scene has changed a bit since I was 26, single, and staying in a tent in a grizzly forest at Bømoen (the dropzone). I am not seen out after dark as much but appear during the daytime to skydive only to disappear hastily more or less in time for the kinder garden. When we had kids, moving to Voss from Bergen was a way to keep enjoying the ever exhilarating, wonderful sport that is crushing through the air at close to 300 km/h.

I counted 10 Veko passes since 2009, not counting the one saved up from last year.

My favorite thing about Ekstremsportvejo is the Veko-mood – it is a thing. And it can come at any time.

- Walking to the registration at Bømoen, the first day of Veko, seeing the quadrupling of people buzzing around, the dropzone filled with bright colored volunteers, the extra levels of busyness and excitement tingling in the air.

– Landing in front of the Veko tent to a cheering crowd, even though I am the least spectacular canopy pilot by a long mile.

– Feeling the rumbling of the Veko today´s video theme going off a full blast in the Veko tent. Way too loud, but just right.

– Meeting the same people you see all season around (including earlier this day), only this time with a beer outside the Veko tent, watching paragliders doing spectacular moves over Vangsen. Also meeting people you don’t see all season.

– Seeing this year´s celebrity strutting the scene with a camera crew in trail, feeling proud that they get to experience this wonderful world of extreme sports. Your world.

The Veko mood is so many things and it fills me with the same excitement it did all those years ago. A thankfulness to have discovered this part of myself and excitement to be part of this community. 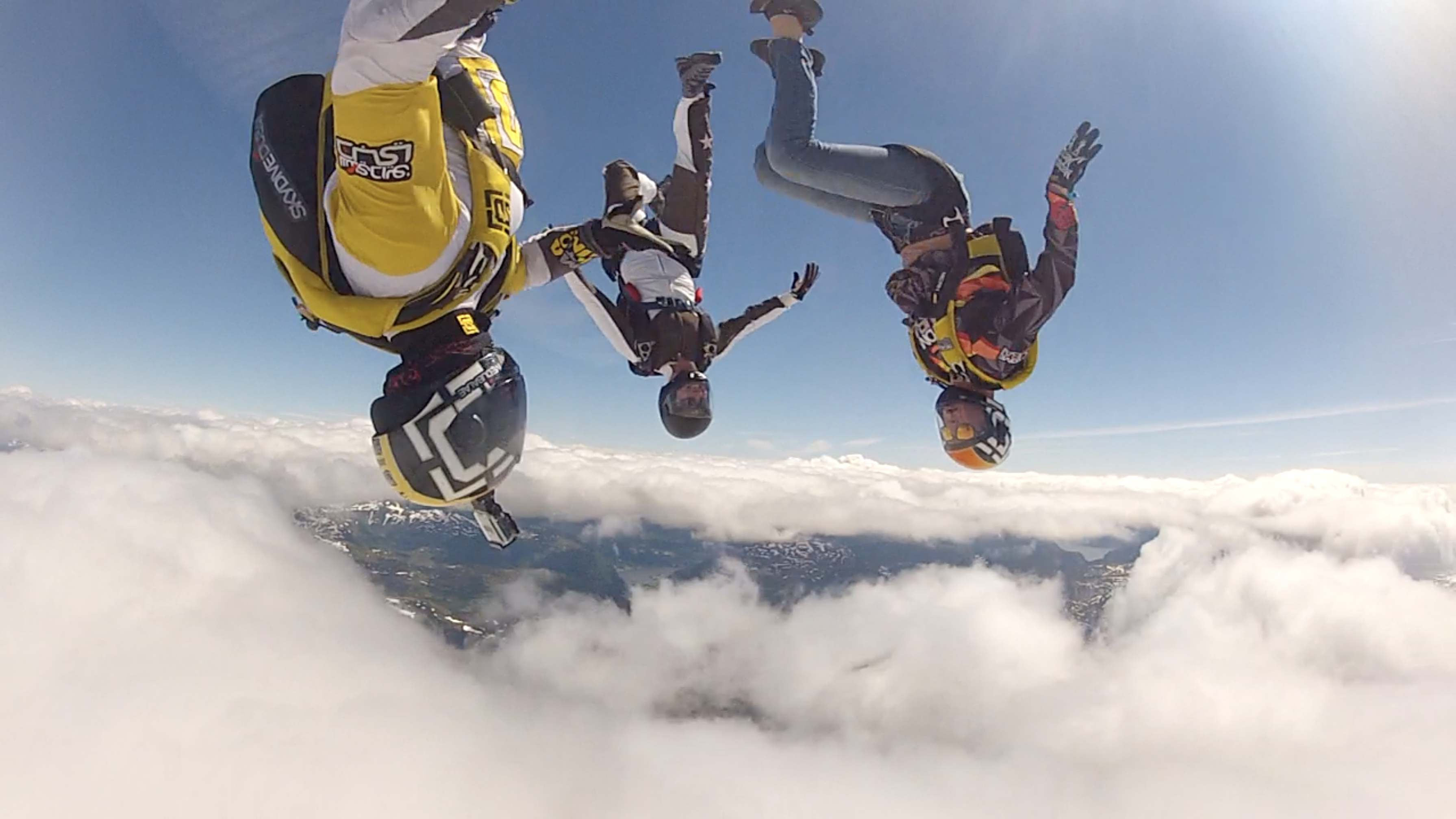 The seasons of 2013 and 2014, were probably when I was at my highest level in skydiving. I now have over 1000 jumps but with four pregnancies and two kids, it has been and is quite challenging to hang on to my certificates. It does not help that over the years I have picked up speedriding and paragliding as well.

My favorite person to do all these things with is my husband, so we need to be rather creative and efficient when we want to fly together. We of course met doing skydiving and did our paragliding training in Peru on our honeymoon.

Oh, but you asked about some memorable moments.

During Ekstremportsveko 2014 we joined a big belly formation demo from two planes. We received some skepticism from the organizer, being free flyers (meaning we normally do vertical skydives and not belly), but were non the less put in the chasing group in the second airplane. The anticipation in the plane – scouting for the lead plane. Seeing the tiny skydivers stack in the door – there they go – 20 people pouring out and into the air. Jumping headfirst to chase after – looking for the assigned position – reaching it – docking – holding on for the rest of the formation to build –- success! Then landing in front of the Veko tent. It is a fond Veko memory.

Another great Veko experience is Breakfast at Lønahorgi- Truly amazing with the helicopter ride to the top and paragliding back down. Also highly ranked as one of our most romantic experiences <3 This year would be great to do a skydive to the top and speedride down so fingers crossed!

Extreme sport for me is not about extreme risk but about absolute presence. I know most people will associate the first. I am not a particularly risk-taking person. I consider moving to Voss to skydive more as a risk-reducing measure, not having to drive Bergen-Voss as much.

When I started skydiving my mother was not especially thrilled. Few moms are. But she came with me to the dropzone, she was there for my first freefall skydive, she assisted as ground duty (HFL) and she learned about the safety measures, the education and training we go through and the respect we have for what we are doing. She became more knowledgeable and less worried.

Moving to Voss again made it very clear that most extreme sports athletes are not adrenaline junkies as some would have it. Here you do not stand out being a skydiver. Meeting other parents in the kinder garden for instance. If they´re not skydiving, then they are paragliding, speedriding, freeriding, doing bike trail, kayaking, longboarding, or other amazing nature-enjoying activities.

Lene thanks for sharing your story with us! 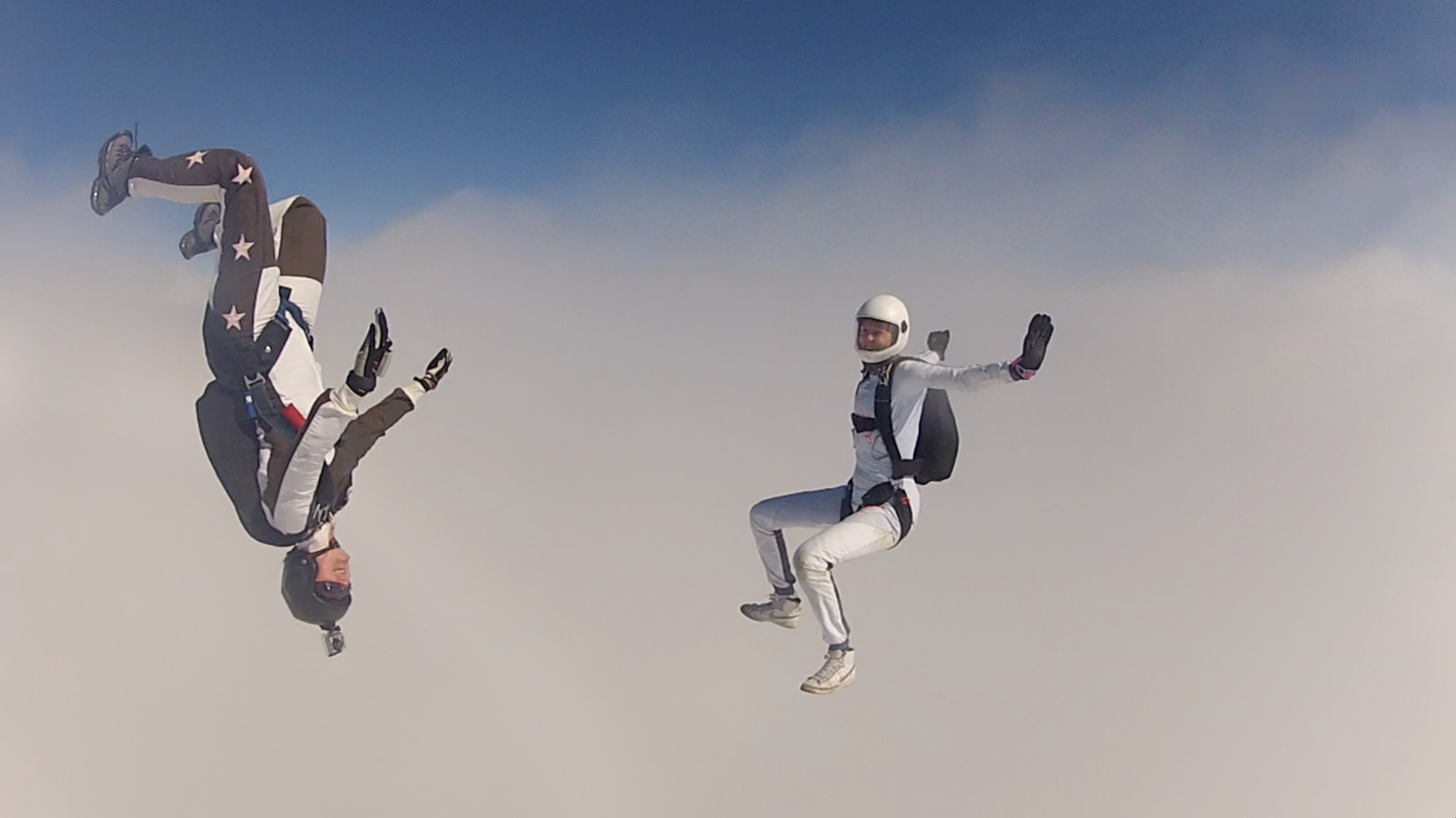